Changing the Trajectory of Lives 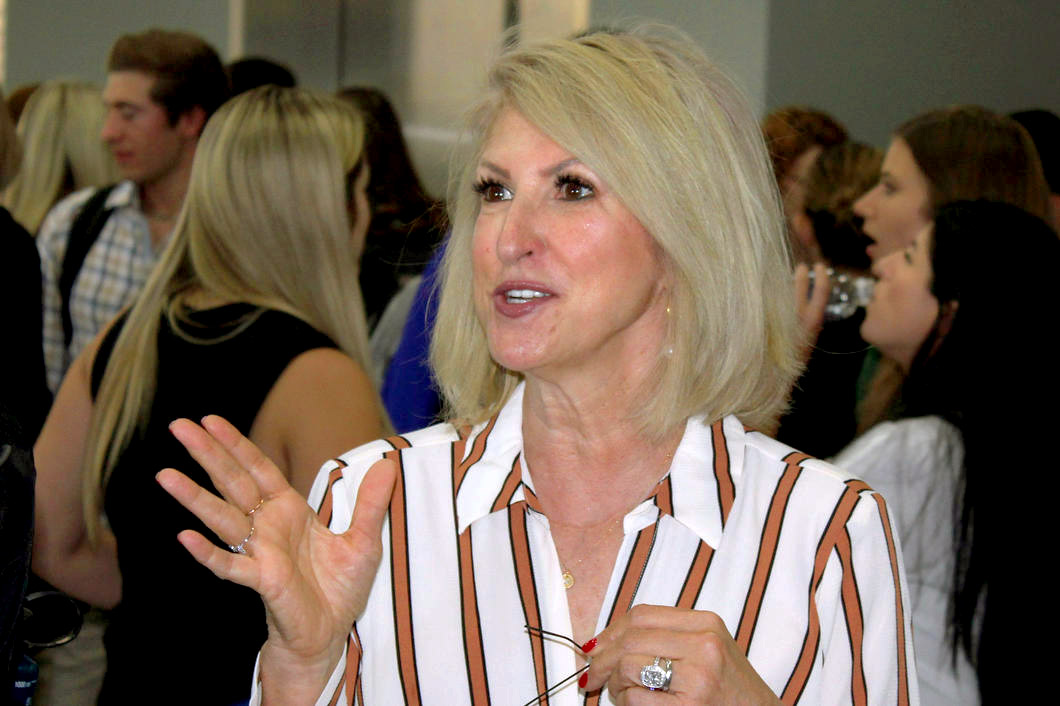 Kris Engelstad McGarry and the Engelstad Family Foundation are helping make the dreams of dozens of UNLV School of Medicine students come true.

How do you thank someone who plays a major role in helping you achieve one of your life’s dreams?

That’s what 57 UNLV School of Medicine students did recently when they met the woman who is paying for their medical school education.

Kris Engelstad McGarry and the Engelstad Family Foundation funded a $100,000 scholarship for each student because she believes in the school’s mission of increasing the number of doctors and improving health care in Southern Nevada.

Walking into the room and seeing them sitting there, Engelstad McGarry says, “made me feel hopeful and encouraged. Too often I get caught up in politics and governance, and while that matters, meeting these young people face-to-face was a reminder that it’s really all about the students.”
Profound Gratitude

For the students, many of whom wouldn’t be able to afford medical school if it weren’t for the scholarships, this was an opportunity to express their deep gratitude to the person who’s helping change the trajectory of their lives.

Enes Djesevic, one of six students chosen to speak at the event, was sitting in the front of the room about 10 feet from Engelstad McGarry, when he abruptly stopped his presentation and said, “You know, I would really just like to give you a hug!”

The room erupted into applause as the noted philanthropist embraced Djesevic, who would later make it clear “I’m not normally a hugger.”

First-generation college students don’t “normally” go to medical school either. But dozens of them are enrolled in the UNLV School of Medicine, thanks to generous donors like Engelstad McGarry. To her, the scholarships represent an open door that allows high achievers from economically disadvantaged families to walk through, competing on a more level playing field — eventually becoming doctors, and "changing their family trees," as Engelstad McGarry said.

“Everybody in medical school is smart. It takes a special kind of person to succeed despite being told ‘no’ your entire life.”
Student Stories

Students Robert Vargas and Kathie Velez told Engelstad McGarry that medical school would have been “completely out of the question” if it weren’t for the scholarships. Velez, who has worked year-round since she was 16 to help support her family, became emotional explaining what the scholarship means to her. This time, Engelstad McGarry was the one who initiated a hug.

Second-year student Lauren Hollifield presented Engelstad McGarry with a collage featuring photos of the students. Later, Engelstad McGarry would realize that the Hollifield sisters — Lauren, class of 2021 and Carmen, class of 2022 — went to high school with her son. So, the mixer succeeded in making fundamental connections between Engelstad scholarship recipients and the woman herself.

The scholarships not only help attract the best and the brightest, but they also protect students from feeling the crushing weight of student loans. According to the Association of American Medical Colleges, the median medical school debt is $180,000. After interest, total repayment can reach upward of $400,000. Heavy debt often causes students to select higher paying specialties, which contributes to the lack of primary care physicians.
Serving Others

At UNLV School of Medicine, students spend their first six weeks speaking to residents and learning about medical needs in some of the more distressed neighborhoods of Las Vegas.

“They’re doing community service because they have to,” Engelstad McGarry said. “But the hope is they will continue their work in these neighborhoods because knowing the challenges people face will help them become better doctors.” The UNLV School of Medicine is one of the only medical schools in the country where community service is required all four years.

Engelstad McGarry joked that she hopes the students will remember her as she gets older and may need medical attention. That brought another rise out of the students, who seemed quite eager to put in the necessary work so they can get busy returning the favor.